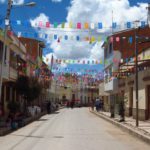 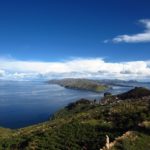 Where the sun was born
Bolivia
Move your body
March 3, 2013 by Cassidy Parker in Bolivia

Slowly, I close my eyes. And snap them open. And close them again. And open them. As much as I try to search for a slither of light, for a break in the smothering blackness all around me, I cannot. The darkness is absolute. My sight robbed, I am more aware of the distant roar of the underground river we have left behind, of how the air around me feels, smells and tastes cold, lacking in human warmth. If I weren’t completely exhilarated, the emotion I would feel would be fear.

I have spent the last hour venturing further and further into a cave, further than I have ever ventured into a place so dark and so uncertain. The cavern where I catch my breath and test my failing eyes is also a time of recovery. I have just shimmied through a gap in the rocks so narrow that breasts and bum could not coexist. I was forced to shuffle back and forth and to hang onto the voice in my head that said, stating the obvious, that as long as I was moving forward, I wasn’t stuck.

My caving experience was part of several days I spent in Parque Nacional Torotoro with two new friends found at the bus stop in the city of Cochabamba at 5am – Attila from the Czech Republic and John from Australia. It still amazes me how chance meetings with perfect strangers can change plans and enhance experiences. I’m not sure I would have endured the bus trip to Torotoro on my own – the devilishly bad road meant that we averaged a painstaking 22km/h, a 135km journey took us over six hours. But what a reward awaited us: a land seemingly untouched since the time of the dinosaurs (of which there remain hundreds of fossils), a land marked by the simple, subsistence-based lives of its inhabitants and its stark absence of tourists. A land of breathtaking beauty.

The entrance to our cave

And this wasn’t even the narrowest point

We walked and walked in Torotoro. We walked until our legs burned and our feet ached, until we deserved a hot shower and a meal – typically Bolivian, served in the local comedor for a little over US$1 and comprising an Everest of rice, a sauceless piece of chicken and a bitter fried banana.

Torotoro, however, was just hors d’oeuvres for what John and I were to experience on our three-day hike from La Paz. I found myself strangely enchanted with the capital of Bolivia – the madness of its traffic, the volume of its people and the variety of their dress from the very traditional to the very modern, the innumerable goods sold by its street vendors, it’s impossibly steep streets, both cobbled and quaint and enormous and bustling.

But we left La Paz fairly quickly to begin the El Choro trail, a hike beginning at close to 5,000 metres above sea level, in a landscape of gaunt snow-capped mountains and grey slate beneath our feet. We plummeted quickly, however, and by the middle of our first afternoon, had hit the Yungas, the lower-altitude tropics that precede the descent into the Amazon Basin. The temperature rose, the humidity caused a sheen of sweat and the jungle started to absorb us.

Mielies drying in the sunshine, grown by villagers I was too shy to photograph

Before I left on this trip, my dad, over dinner, fork in hand, asked me why I travel. I paused and settled on the best answer for the moment. To be out of my comfort zone. To feel and experience something unique. To put myself in a position where I can surprise myself. El Choro did all of those things. I don’t believe I have ever felt so remote, so incredibly far away from anything familiar, from anything or anyone I know or love.

Our trail danced with a gushing river for 57km, hopping over it precariously at times on rickety rocks, sometimes more comfortably along suspension bridges. The water flowed around us constantly and we kept our eyes above, searching gaps in the jungle to spot the waterfalls that began high above us. They say that it’s better to do the trail in the dry season, but experiencing it when the rain has been falling for several months gave the impression of being a part of the water running down the mountainsides, of being part of the earth beneath our feet – especially when the mud planted our feet firmly in said earth.

By the end of the third day, when the trail spat us out in a village that comprised more than a few faces and a handful of llamas, I felt as though I had formed a relationship with our river. I knew its undulating movements, the tributaries that fuelled it, knew its thunderings and its silences. I felt happy. I felt happy to have moved my body for so long through such a place.

I am more than seven weeks into my trip now, which means that I have surpassed the mark at which I broke my foot the last time I was in South America. I am grateful for my two working feet.