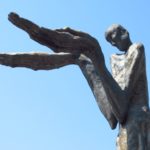 Don’t judge a country by its capital
Chile
Here we go again
January 11, 2013 by Cassidy Parker in Chile

This blog was born of a broken foot. Now, 13 months later, having sufficiently healed, having recouped the travelling money I was forced to spend on medical bills, and having survived my first flight on one of the United States’ notoriously awful airlines, I find myself back where I left off. Bienvenidos a Chile!

Sunset as we descend into Miami

I shouldn’t be as amazed as I am that travelling for the best part of 17 hours can land you in such a completely different space and climate. It really is self-evident, and one would hope that, after sitting in a seat about as comfortable as a straight jacket for almost a day and a half, you would at least be on the other side of the world. But amazed I am. And on the other side of the world I am. I suppose that the transition from Toronto, where I have lived for the past eight months, to Santiago, which will launch me into a three-month South American adventure, has just been so stark – the most striking change, of course, being the 30 degree temperature shift.

It is almost 11pm now, dark at last, and ever so slightly cooler after the day’s blasting heat. I returned from a late-evening run a little while ago, an attempt at shedding the wobbly bits that the Canadian winter deposited on my hips and bum and thighs and tummy. I found myself chasing Santiago’s glowing mountains as I ran. They surround and weave through the city, an appetiser to the Andes in the east.

I am staying with close friends from my year in England, Elizabeth and Victor. As the evening winds down, we sit to watch Chile play Bolivia (the game, I would think, is obvious), Victor has the vuvuzela I gave him when they came to the World Cup in South Africa in his hand, I have a beer in mine. We are patiently waiting for the commentator to shout, ‘GOAAAAAAAL!’

And I realise that I am not in Africa. And I am not in Canada. And a great sense of anticipation flows through me.

We’ve been in quarantine a week today. It’s be

Two years ago, I bought a small sunny house on the

Prince Albert’s pretty buildings, they all got t

After 39 years in Joburg, my fever tree-hugging mo

I moved out when I went to university, but this li

It rained a bit and the penguins came to say hello

The absurdity of the present. . . #whoknewyoucould