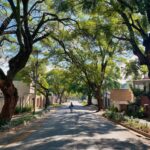 Home with a capital H
My writing
Heat, canyons and quiver trees: Namibia, part one
June 21, 2022 by Cassidy Parker in My writing

In this place, at this time of day, you are the anomaly. Everything around you is dry, dry as dry can be, dry as deadpan humour, dry as a dead pan.

Your forehead is wet and your armpits. The backs of your knees. It’s running down your temples and making your arms shimmer. It’s dripping from nape to coccyx. And there is nothing to be done, but wait your turn in the immigration queue and take a moment to realise that this deluge of sweat in this barren, bone-dry place is telling you that you are here.

Here in Namibia. At last.

Our 21-day, 6,000km adventure from Cape Town to Etosha National Park in northern Namibia and back was several months in the making. It was a 70th birthday invitation from Pam, Matt’s mom: that the family — all 11 of us, including my mom, Joy — buckle into three large 4x4s and set off on a camping trip through the country in which Matt and his sisters were born, and where they all lived for a while in the 1980s.

Barring Matt’s parents, several of us had never been there at all, and the rest not in decades.

The night before we left Cape Town in mid-March, Matt said to me, “I don’t know what to expect — I just can’t quite imagine what we’re in for.”

As it turned out, no amount of imaging could have prepared us.

Our sweat fest of a border crossing only involved two thirds of our party, unfortunately. Matt’s sister Jen, her husband Craig, and their two sons, Douglas and Michael, were delayed by Doug’s still-positive Covid test. I was still testing positive, too — almost a month after my second Covid infection in February — but Namibia dropped its testing requirements for vaccinated adults the day we crossed the border, allowing me to squeak through. Jen, Craig and the boys joined us a couple of days later, after we had already spent a night in the little border stop of Noordoewer and one night camping in |Ai-|Ais.

|Ai-|Ais is the final stop on the famous 85km Fish River Canyon hike. Its camping grounds are on the floor of the canyon, the river nearby. Mostly, |Ai-|Ais is known for its natural hot springs, which, though lovely, were absolutely and unequivocally the last thing we needed.

My mom’s tent at our campsite in |Ai-|Ais. Those promising clouds came to nothing

We’re not quite sure how hot it was while we were there. Matt and Pam bought local SIM cards when we crossed the border, but they were only occasionally useful. Almost across the country, cell phone reception was patchy at best. I have never had such a disconnected holiday and, now that I have, will forever seek it out.

We couldn’t check the temperature, but our estimate is that we (un)comfortably hit 40 degrees both days we were there. At night, it cooled to a sweltering 26-ish. Inside our tent, all doors and windows open, the air thick and stagnant, the day’s heat still radiating off the canyon walls, Matt and I would mutter sleeplessly to each other: “I love you, but your foot is touching mine.”

It was Matt’s sister, Rose, who suggested that we get up early to watch the sunrise from the canyon’s lookout point on our second day. This should come as no surprise: it’s typical of the wonderful ideas that usually come from Rose. Her daughter, Emily, takes them in her stride.

We wound our way out of the canyon in the dark, the shadows of its rock formations grotesque under the full-moon light. On the plateau, the horizon just beginning to lighten in pale blues and dusty pinks, a skulk of jackals, pups included, brought us to a stop. So did the moon. The solitude. We drove for an hour and a half to reach the lookout and didn’t pass another car. We would grow used to this feeling over the weeks to come.

The Fish River Canyon is the largest canyon in Africa and one of the biggest in the world, with a length of 160km and a width of 27km in parts. Seeing it for the first time, its enormity fills your chest, whipping the breath from your lungs. It’s just so huge. And you, you are just so small.

We made it there shortly after sunrise, poured fresh cups of coffee, started to make headway into what we would realise was an unlimited supply of Pam’s homemade rusks, and sat in silence, watching the retreating shadows unwrap the canyon below.

We had the whole place to ourselves. We felt like we were the only people in the world. The idea that this landscape could end in a village, a city, any place with people, was impossible.

We peeled our way back to camp and, by lunchtime, Jen, Craig and the boys had joined us. There was no ice at the campsite reception, and we hadn’t bought any of our own yet, so our gin and tonics were warm, but our party of 11 was happily reunited. We sat in the shade. We ate jaffles for lunch. We stewed in our juices.

The temperature cooled slightly as we headed north over the next few days. Etosha National Park was our first big destination, and the only place where we would spend five nights in total, though in two separate campsites.

Our journey there included a stop at the quiver tree forest outside Keetmanshoop, a night at Rehoboth, a restocking mission in the capital Windhoek, and a night on a remote farm outside Outjo.

The whole gang at the Tropic of Capricorn at sunset

Lake Oanob, just outside Rehoboth, and one of the most memorable early-morning swims I’ve had

Ron and Matt and the waning moon. Many a morning and evening were spent like this

I’ve travelled through and to remote parts of South Africa many times, but in hindsight there were always signs of life: a farmhouse beneath a copse of trees in the dusty Karoo, a dirt road leading somewhere, a petrol station serving packets of chips and Coca-Cola. “Who lives out here?” we would say. But here, with no one — not a single soul, barely a secondary road, never mind a house in sight — we said instead, over and over again, “Where is everyone?”

Namibia is the third least populated country in the world and you can feel it — there’s just no one there. It’s three and a half times the size of the UK, but with a total population smaller than Manchester. There are three people per square kilometre; 2.6 million in total. The only other countries that have lower population densities are Greenland and Mongolia.

The road into Windhoek — population 460,000 people

Beyond the border, where South Africa’s stark Northern Cape slams into the Orange River, Namibia was green. Greener than green. Greener than it had been in a decade. We couldn’t fathom it. Of all the things we had tried to imagine about Namibia, that it would be lush and verdant, its whole desert terrain sprouting life, had never crossed our minds.