Turn left and leave it all behind

There’s an unmistakeable moment – just one – that completely captures solo travel for me. It is the instant, relieved of my bags and assured of a place to sleep for the night, that I step out onto a foreign street in well-worn (but usually impractical) shoes (I’m a slip-slop traveller), and choose whether to turn left or right. There is such delight in the decision, such opportunity, such promise of… What? Adventure? Mysteries revealed? Self-discovery? It never fails to turn the butterflies in my stomach into bats. 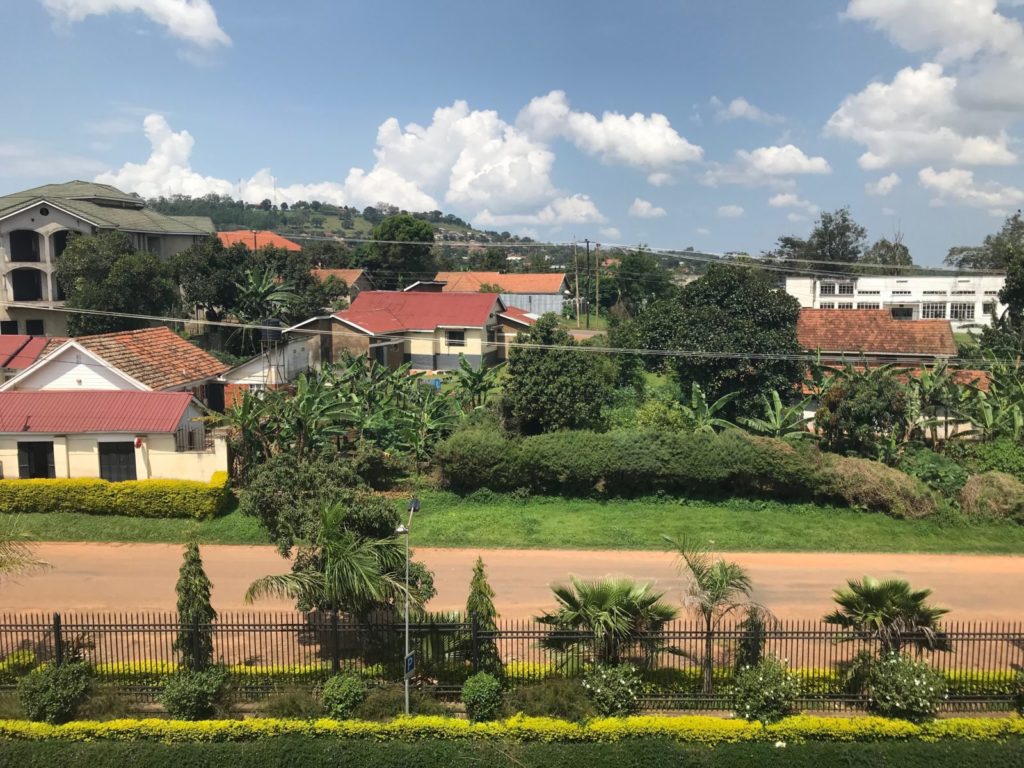 The view from my hotel window. Left or right?

Today, I know that I am turning left, but the sensation is there all the same. I know I’m coming back later to turn right, to head in the direction of a recommended fish restaurant on the lake. But first: the Entebbe Botanical Gardens. I pay my 10,000 shillings at the entrance and receive an enormous A4 receipt, with “Ten thousand shillings only” written out in full for “Gate charges for one foreign visitor”. It is signed, it says, by the garden’s Director General. 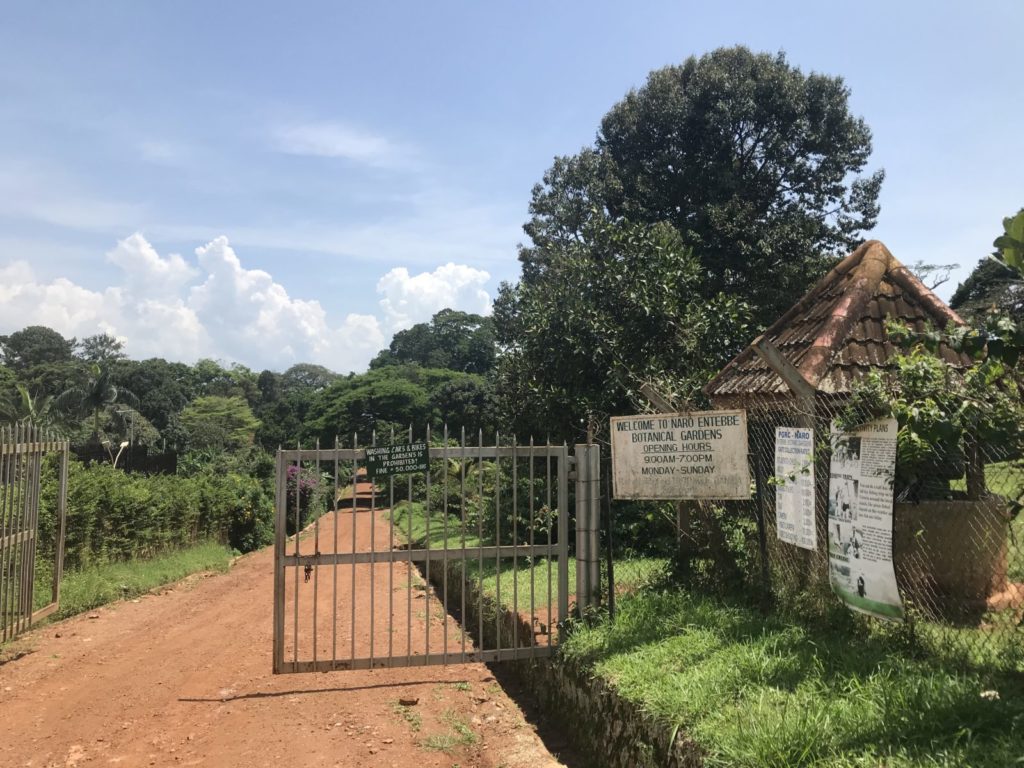 The entrance to the Entebbe Botanical Gardens

Within seconds I am inside the verdancy I saw from above when I flew into Uganda on Saturday afternoon. All around me the green greenness hums and sighs and squawks and squeaks in the sticky midday heat. These, truly, are the tropics. I am mere degrees north of the equator. The garden’s resident monkeys and birds keep me company as I walk, but my attention rests on the trees whose ancient limbs stretch heavenward, ever-hungry for and always rewarded by the equatorial sun. I arrive on the edges of a lake named for a white queen who lived on a colonising island half a world away. It is vast and it is beautiful, and it is not an untroubled body of water. 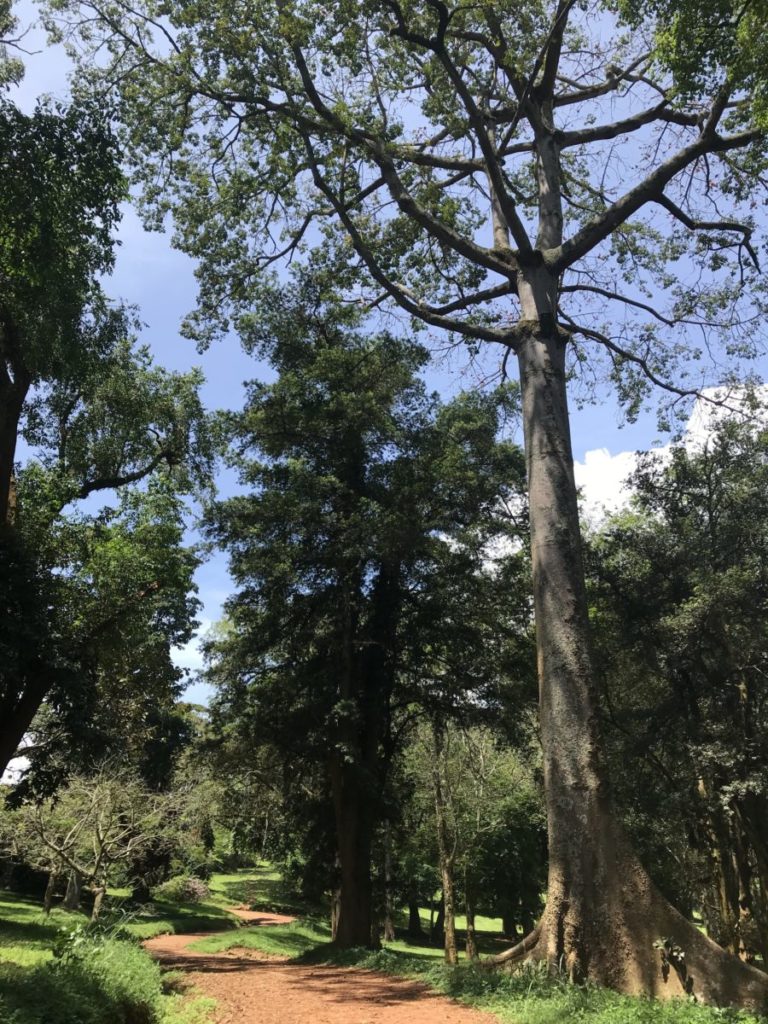 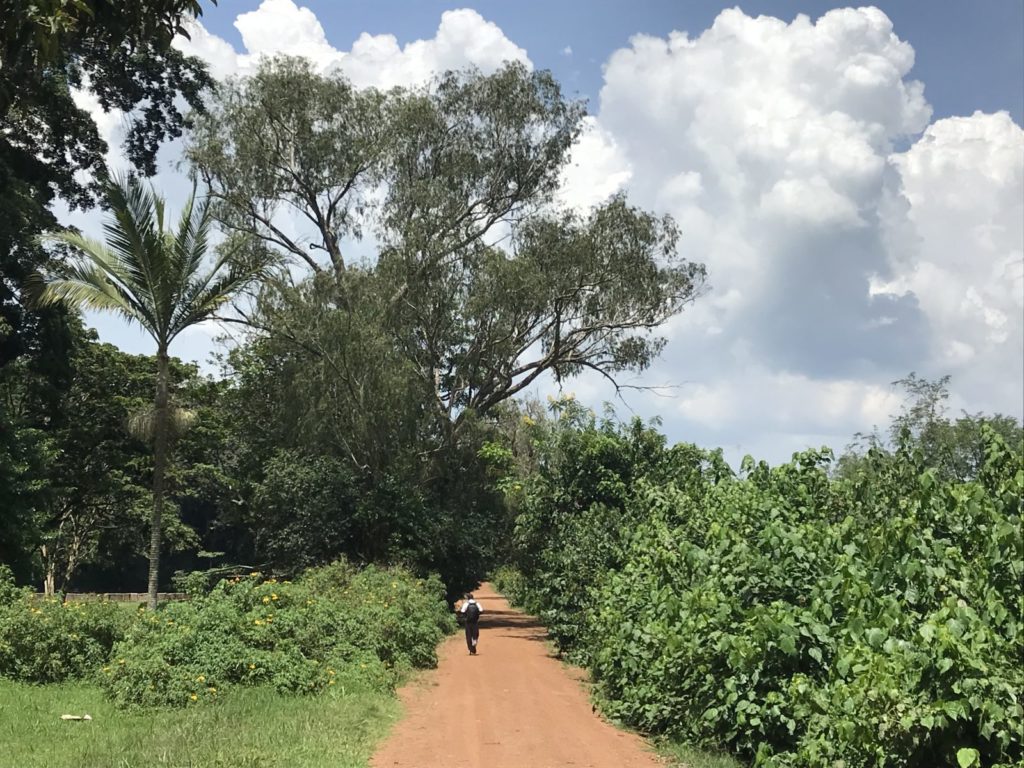 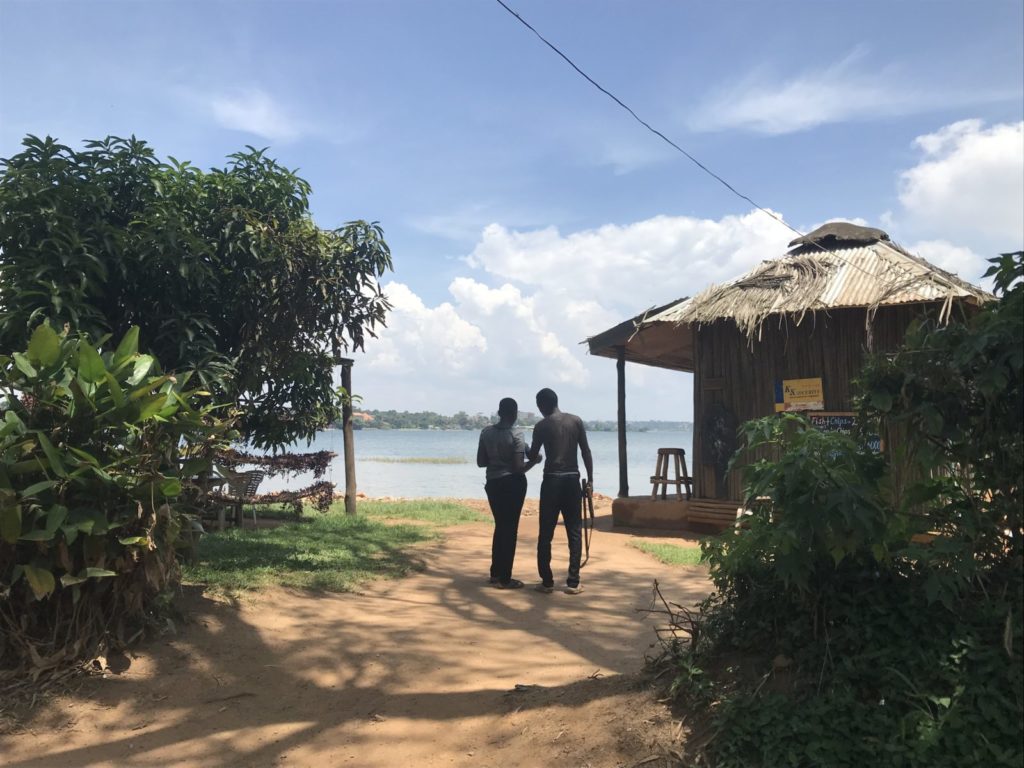 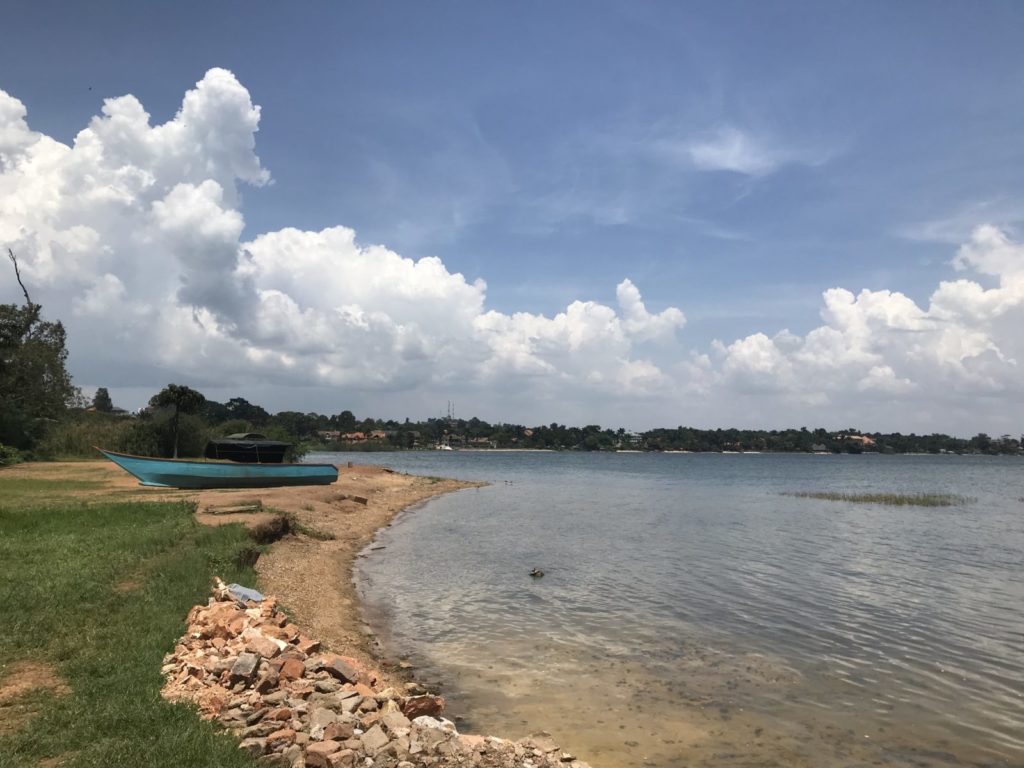 I feel very far away from the commotion of Kampala. I’ve spent my first two nights and one full day with a friend whose smile is comparable only to her intellect, ambition and laugh. Catherine has been living in Kampala for a year and is the perfect host, introducing me to her city’s residents, rhythm makers and restaurants. Only as I leave Kampala to attend a conference on intellectual property and access to medicines in Entebbe do I realise how few photographs I’ve taken of the city. The few I do fail to capture the lunacy of its traffic and the energy of its people.

I leave the gardens with the realisation that I have not thought about this week’s deadlines, my petty worries or matters of the heart since I first stepped onto Berkeley Road and turned left. A couple of hours later, having found myself at said recommended restaurant, I eat the meal of a lifetime: fresh tilapia steamed in banana leaves with lemongrass and black pepper (and no small amount of rice). I sing the meal’s praises profusely to Isaac when he comes to clear the table, asking him to pass my thanks on to the chef. He smiles warmly, clearly pleased that I am pleased. There’s a campness to his gestures, and I feel a surge of sadness and anger as I imagine what life (if I am not mistaken) must be like for him here – in this warm and welcoming country where homosexuality has no place. 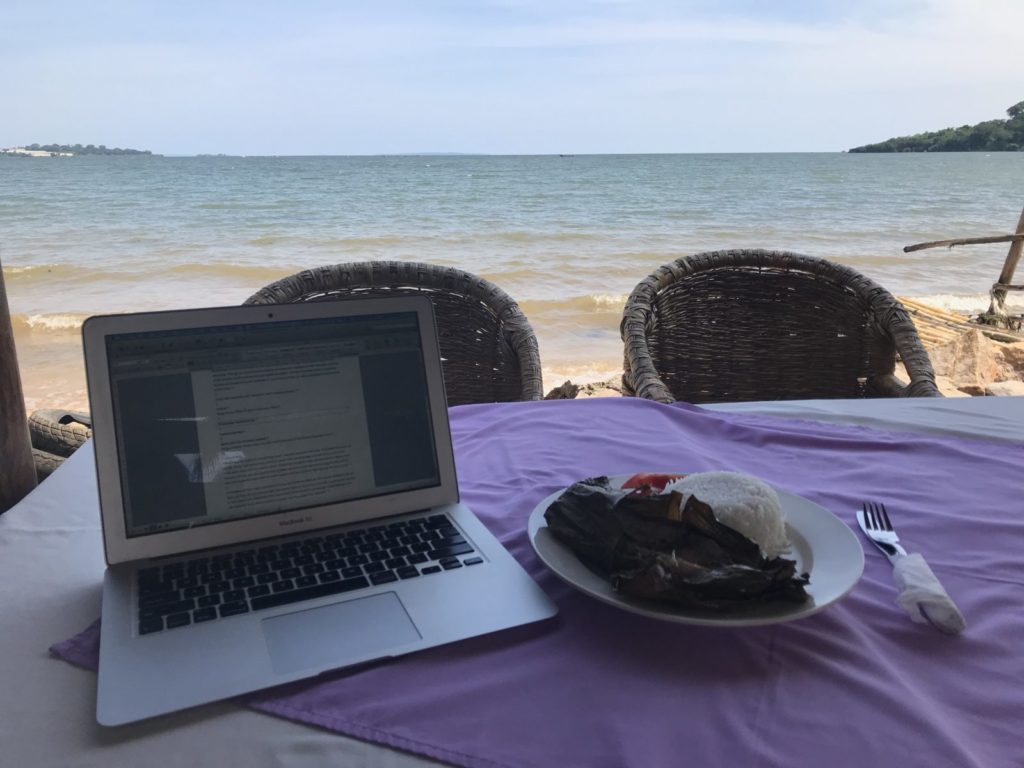 I work for a few hours and, as the temperature settles from sizzling to steaming, decide that I need to move my body. I put on my takkies and break into a run, turning left once again past the gardens; past a boda boda (a small motorbike taxi) carrying two grown men and, between them, a full-size mower; past a bicycle piled almost two metres high with plastic buckets and chairs; past three vervet monkeys on one corner, a dozen cows three roads down, and the constant bleating of roadside goats.

The sun starts to set, without colour or vibrancy, but rather with a final shock of white light. I pick up the pace, Catherine’s words echoing in my ears. “I avoid walking home from work at night,” she said to me on Saturday, “not because it’s dangerous, it’s totally fine, but because there aren’t any streetlights and you can’t see a thing.”